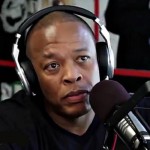 Dr Dre will release what he says will be his final album. ‘Compton A Soundtrack’ will be Dre’s first album since 1999’s ‘2001’ and only his third ever album.
The founder of Beats is hanging up his headphones after this ‘Compton A Soundtrack’, presumably to count his money (which should take the rest of his life if he starts at the first dollar).

‘Compton A Soundtrack’ will coincide with the release of the NWA movie ‘Straight Outta Compton’. ‘During principal photography of I felt myself going to the studio and being so inspired by the movie that I started recording an album,’ Dre said on The Pharmacy. ‘I kept it under wraps, and now the album is finished. It’s bananas. It’s an ‘inspired by’ album. It’s inspired by Straight Outta Compton, we’re gonna call the album Compton: The Soundtrack. I’m really proud of this.’ Dre also called the album his ‘grand finale.’

The track listing follows below.

‘Compton A Soundtrack’ will be released this Friday, 7 August 2015.