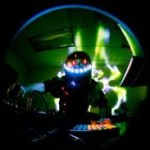 Ghostkick are one of the most exciting EDM Producer/DJ’s around, based in OC, Los Angeles they have gained a loyal fanbase across North America and Australia and are being labelled as the new age Daft Punk…   With there underground success of there new EP “The Seven Deadly Synths” there now gearing up for there new release “Great Escape”  Label Head Dani Stephenson and Marketing Director, Sara Fay have been working with Ghostkick on the development of an Anime Album feature film due for release in early 2015.  We will be interviewing Ghostkick to find out there inspiration behind the project and there plans for 2014.